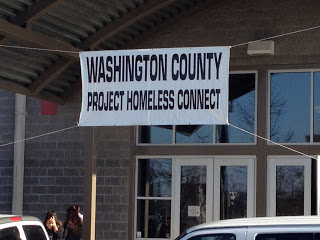 Scheduled throughout the day were a wide range of services offered for free, including health exams, HIV testing, counseling services, housing guidance and legal assistance. 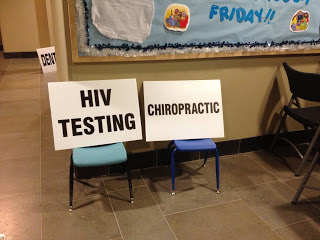 First Impressions:
Via my “go to” volunteer project scheduler, Hands On Greater Portland, I signed up to be an Intake Volunteer. The job description:

Volunteers will sit down with every homeless client that attends the event and learn about their past. We need to collect data for the Homeless Management Information System (HMIS). This information determines a substantial amount of the funding programs will receive. These are the programs that help provide critical services for people and families struggling with homelessness in Washington County.

No past experience is required. We just ask that you are willing to initiate conversations and be an eager listener.

This job was written for me! I thrive on initiating conversations, plus, I’ll get answers to the questions I’m always wanting to ask when volunteering with the homeless: How did you get here?
Unlike previous weeks’ anticipation of a new volunteer experience, I remained calm. There was no pre-freak out session or self induced stomach ulcers; just a serene realization that I would help out for few hours on Friday morning. I found this odd. I expected my jitters to disappear around week 21 of this experiment, not week 4.
Sonrise Church is a 10 minute drive from my house. I planned on getting there well before my 8:00am start time.  Nearing my destination I saw the parking lot, but the line of cars snaked around the block did not move quickly. Forget early. Or expecting punctuality, for that matter. Men in reflective vests stood in the lot assigning parking spots. How many people were at this thing anyway?
A lot. Hundreds of helpers. Twice that number stood waiting to line up for whatever service they needed most.
I entered the lobby and asked a man wearing a volunteer badge for directions. He pointed down the hall to the door marked “Volunteers”. I checked in with staff from Hands On Greater Portland and received my lanyard, name tag, and wrist band. They directed me to the auditorium and told me to look for Robyn, the point person for intake volunteers. Everyone slated to help gathered in the venue to hear a guest speaker before the activities of the day started. 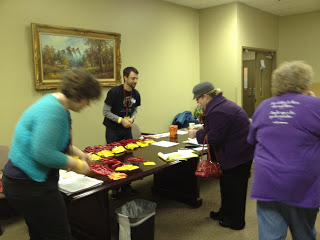 Love your neighbor as yourself.  Matthew 22:39

I know everyone in this church right now is my “neighbor” and I am supposed to love them. But I don’t love them right now. I want to scream at the addicts because there are people genuinely struggling who need services; men and women who don’t mind working, who can’t afford health insurance, or those who have little mouths to feed at home.
If I stop and think, if I really ponder and dig deep, a flicker of understanding enters my consciousness. Where would I be if I had been shuttled through the foster care system for 18 years? Where would I be if I was sexually abused my my father? Would I turn to heroin rather than relive the memory of being kicked and beaten for a lifetime?
When I contemplate the background, I find the compassion. 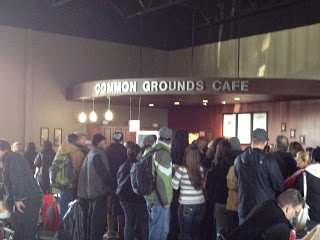 After disbanding, Robyn and I walked down the hall together. I shared about my blog and the goals I’ve created for myself this year. Thus far, it hadn’t been difficult to record my experiences. But how would I write about what I encountered today?  I am not the same person I was 4 hours ago. How do I take the emotion, the devastation, the fatigue that I feel right now and find words to describe it?
Today my quest was to ask the question of the homeless, “How did you get here?”
I changed my mind. I don’t want to know anymore. The pain they carry is to much for me to bear in my comfortable, middle class life. I am aware that the end goal for my spiritual journey is to transform my true nature into that of a servant. Today I realized that I have a long way to go.