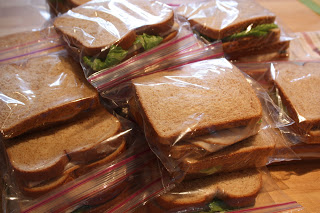 What I did:
On Wednesday evening, I asked my 12 and 9 year old daughters to make sandwiches and package lunch items together. On Thursday, a friend and I went to Downtown Portland and handed the lunches to those who looked like they needed a helping hand.
That’s it. No sign ups. No organizations. No non-profit websites. Just gave food to those who were hungry.
Oh. And socks.
First Impressions:
I haven’t been feeling awesome lately. If you read my blog on the last day of April, you’ll remember that I lost my energy. I still haven’t found it. Some days are good, some aren’t. I hesitated signing up for volunteering with an organization on the off chance I wouldn’t feel well on the date I committed to. I hate backing out of things at the last minute.
On Monday, I had a light-bulb moment. What if I just gave food to those who needed it? Just one meal, one brief way to show someone that someone else cares. I could pick my day, I could pick my time, I could do it alone.
“I don’t like you going to feed the homeless alone,” my husband stated.
“Umm, but if I told you I was going downtown to walk the waterfront alone, you’d have no problem with that,” I argued. “Plus your office is right there – you can practically see me out your window. Remember, we live in Portland. Not inner-city L.A.”
He pondered that. He didn’t approve, but I was doing it anyway.
**********
On Wednesday morning, I made a trip to Costco. I walked up and down the snack aisles contemplating what a person who didn’t know where his next meal was coming from would want in a protein bar. Lost in thought, I almost rammed Laura with my shopping cart. The same Laura who volunteered with me at BizTown a few weeks ago.
“Whatcha’ doin’? Weekly stock-up?”
I told her my plan to make lunches for the homeless.
“Are you going by yourself?!?” She sounded like my husband. It’s PORTLAND, people! Downtown. In the middle of the day. I won’t even cross a bridge to the east side.
“I don’t have anything going on tomorrow,” she said, “I’ll go with you.”
“You can go with me because you want to hang out, or because you want to feed homeless people,” I warned, “But you cannot go with me just to be a bodyguard.”
“Uh-huh. Sure,” she smiled.
The Job – Wednesday:
My favorite big-box store had everything necessary for making substantial lunches: turkey, bread, apples, protein bars, water, chips, little mustard packets and Ziploc bags. On the way pay for my purchases I passed socks. I bought 24 pair. In all of my volunteering with the homeless this year, I know one thing they all need are socks.
When my girls got home from school on Wednesday, I told them my plan. Immediately they wanted to start on the sandwich making. The task I thought may take all afternoon only took about 10 minutes. I stashed 21 sandwiches in the fridge as they started assembling the rest of the contents into gallon sized Ziplocs. Everything was ready to go for the next day within 1/2 hour. 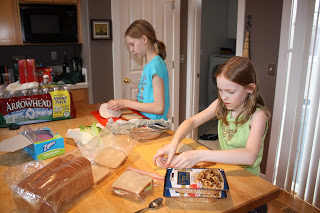 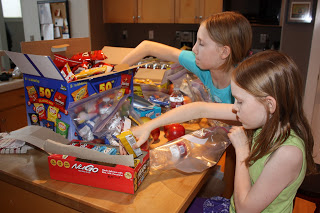 The Job – Thursday:
At 11:00, I picked up Laura and we drove downtown. We chatted about the best route and place to park, but in my head I started second guessing my plan. What if there were no homeless around today? What if we walk up and down the waterfront and we come home with 21 sandwiches? Am I totally dumb thinking this was a good idea?
I parked in a garage near the Pioneer Place Mall. As we exited the elevator and stepped onto the sidewalk, we only saw business people and joggers. Great. No homeless.
We walked a few blocks and passed some of Portland’s popular food carts. Sure enough, we found a group of kids hanging on the corner begging for money. Trash bags full of belongings on their backs, piercings in their noses, their cheeks, their eyes, and I’m sure numerous other places marked their bodies.
“Do you guys want some lunch?” I asked the 5 of them.
“Oh, wow! Thanks!” echoed a chorus.
They were over the top appreciative.
“Cool! These are GOOD sandwiches! Not even peanut-butter and jelly,”  we heard as Laura and I passed around bags to all of them. “And you even gave us mustard. You really thought of everything!”
“How about socks?” I inquired again.
“Oh, wow! You guys are awesome. Thank you SO MUCH, really!”
Seriously. Even if we didn’t hand out any other lunches, I would have felt our job was complete. These were 19-20 year old kids. Kids excited about turkey and socks.
We kept walking toward the waterfront and I spotted someone looking like he needed food.
“How can you tell he’s homeless?” Laura whispered.
“Because he’s not wearing shoes.” The dude was hanging out in his socking feet. So we gave him some food and a new pair of socks.
Laura and I strolled along the river handing out more lunches to those awake and gently placing them next to those sleeping in the sun.
We both stopped and stared before approaching one guy wrapped in his winter coat even though it was 60 degrees outside. He was leaning on his suitcase, piled high with filled Hefty bags and an umbrella taped to the side. He saw us behind him. You can do that when you have rearview mirrors on your glasses. We inched forward.
“Would you like something to eat?”
“What is it?” he frowned skeptically.
“Just turkey,” I replied. “and some water and stuff.”
He hesitated. “For free?”
I nodded.
“Would you like a pair of socks?” I handed him the white tube socks.
He broke out in a huge smile that lit my life for that moment. “Oh YES! How you know I got no socks on?”
“Have two pair.” Laura reached in her bag and gave him another set.
My earlier worries were for naught. Plenty of our city’s destitute residents spent Thursday afternoon at Waterfront Park. We didn’t notice one couple until they flagged us down.
“Hey! We’re homeless!”
We hiked up the grass slope to reach them. Yep. They weren’t lying.
They thanked us for lunch and introduced themselves. Mike and Maria shared their story. Mike wants his Oregon ID so he can get a job, but you know, the government just needs that danged birth certificate. He’d be working though, if he could. He doesn’t do drugs…well maybe weed…but nothing else.
Okay, Mike made me laugh a little. If I had his life, smoking weed may be the only way I could deal. He kept talking.
“Yeah – we like when it’s sunny ‘cause we can come out here on the grass. When it’s cold, like at night, we hang out by the mission. All the kids come by, drunk after the bars, and yell ‘Hobos! Losers!’ and that’s just not right. We just put our sleeping bags over our heads to block them out.”
That compassion I’ve been looking for crashed over me like a wave while chatting with Mike and Maria. I don’t know the “hows” or the “whys” of what led them to their situations. But no one deserves mocking. Especially when they’ve hit rock bottom. Not ever.
“Mike, I can’t say why some kids are stupid and mean,” I stared at him intently, “but Laura and I promise that we’ll raise our own children to show respect to everyone.”
I’m not sure why, but that promise felt binding with Mike. Could I actually be experiencing mercy toward my “neighbor”? 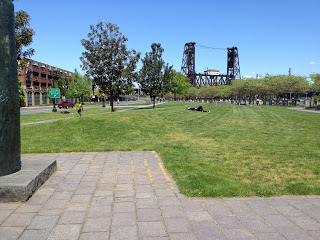 Laura and I left the couple promising we’d look for them the next time we came downtown. We peered into our bags – just 4 lunches left. As luck would have it, there were 4 more homeless citizens as we reached the end of the park. 2 awake, 2 asleep.
What I learned:
My goal for this week wasn’t just to provide a quick meal for the sake of doing something good. I really strived to see the people we were feeding.
Those kids begging for money were once in elementary school. Were they bullied or bullies themselves? Were they abused at home? Or are they just rebelling against their parents? They were just so thankful for mustard and lettuce on the sandwich.
Mike and Maria wanted conversation. Someone to share their stories – to listen.
Why was my heart opened wider today than anything I’ve done before? Maybe because I was the one giving the gift. No one begged. No one asked. It was a free-will gesture. Not for my own appearances, like, “Look at how I’m helping these poor people,” but with everything in my being I wanted each person to know, “Today, someone cares about you.”
Oh, and that energy I’ve been missing? I found a ton of it on Thursday afternoon.

“If you do away with the yoke of oppression, with the pointing finger and malicious talk, and if you spend yourselves in behalf of the hungry and satisfy the needs of the oppressed, then your light will rise in the darkness, and your night will become like the noonday.   Isaiah 58: 9-10