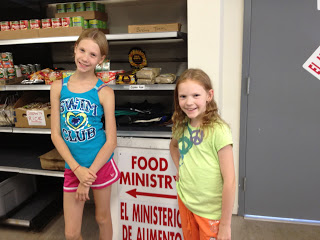 Where I Went:
This week marked the 6th month my daughters and I have delivered for SCAT. If you haven’t heard of this amazing ministry, please read about the first time we volunteered, or the second, or the third, or the fourth, or the fifth.
The Job:
The afternoon started as it always does at SCAT. I made phone calls confirming residents would be home. My daughters started packing groceries. Last time we delivered, we completed the entire job in 1 hour and 15 minutes. This time, I wanted to beat that record.
The delivery route that day seemed a little off. Usually locations reside in the same general vicinity, but this time 2 houses were north of the SCAT building and one was all the way south on Murray Road.
I despise Murray Road. Especially between the hours of 2:00 and 7:00. So. much. traffic. The plan was to deliver to the far end of Murray Road first, then hit the other two houses on the way home.
Traffic on Murray Road was heavy, as expected. The whole way there, I wondered why I never developed patience in a crawling line of cars. Even writing about it gives me heart palpitations.
We slowly made it to the first house and delivered. (They were so thankful and appreciative!)  Then we slowly made our way back past the SCAT building to the 2nd delivery. (They were also so thankful and appreciative!)
One stop left. We would not beat our record, but we would still be finished before 5:00. I had hungry kids and we were all a little grouchy.
I searched for the last house. And searched. And searched some more. I finally called the woman we were delivering to and asked her to verify her address.
I looked up the house number on my GPS. Found it. Did you know that one wrong number on an address can lead you to the direct opposite side of town? The woman’s apartment was one street over from our first delivery. On Murray Road.
There may have been a curse word said in anger. Scared to cause me even more frustration, my girls were silent.
At 5:45 we found the apartment. The woman met us at the door, thankful for the food and grateful for the company. We brought the boxes in and she shut the door.
I don’t like it when people shut the door with us inside. It makes me nervous.
The woman wanted to talk. She brought out her dog and told us all about the dog’s life. Then she told us all about her life. Then she showed us the photos on the wall of all the pets she’s ever owned and told us about their lives.
“Well, I’m glad we could help,” I offered as we made our way toward the door, but she beckoned us to the living room where there were more photos. On the wall hung two 11×14 portraits of herself in lingerie. My kids looked at me with wide eyes. Great.
She pointed out another picture and explained the man in it was her fiancée that died and that’s why she doesn’t have any money. She leaned over and whispered in my ear, “Well, he was murdered but we tell everyone he committed suicide.”
“Why am I here?” The thought kept running through my brain. “I’m hungry. The kids are freaked out. We need to leave!”
The girls and I inched over enough that I could reach the door and open it. I unlocked the car doors with my remote and shooed the kids in while I tried to end the conversation. Finally, I broke away.
Driving home (on Murray Rd.), I was still a ball of frustration. Frustration from traffic. Frustration from the deliveries taking so long. Frustration that everyone was hungry and we just spent so long in that woman’s apartment.
I prayed, angrily, to God. “I’m tired. I’m doing a GOOD thing! Why does this have to be so aggravating?!?”
When my frustration dissipated (after many hours), I heard God’s response. “This is not about you.”
And that is my lesson.
My hard to hear, I don’t want to accept, stupid lesson.
This is not about me.
I can imagine God saying, “Suck it up. You do this for ME. This is so others can EAT. You have a CAR that you can drive anytime you want and MONEY to buy FOOD. Andrea Dawn (God uses my full name when He’s scolding me), get it together and change your attitude!”
Sometimes, when trying to learn the “nature of a servant”, I take one step forward and two steps back. I thought by now something silly, like traffic or talking with someone who needed the company, would not bother me knowing I was helping others in need. But the truth is, my selfish nature still breaks through. How long will I have to serve others until this isn’t the case?
I don’t know the answer. I do know I’m thankful for a God who loves me. Even when I act like a spoiled brat.
Related Post:
SCAT Food Delivery Team