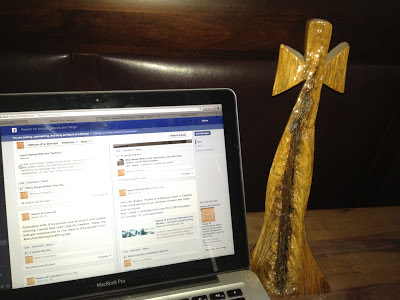 A few mornings ago my father came to the house for coffee. We chatted about my blog, then delved into the conversation of Facebook, Twitter, and other sites in which this 68 year old man takes no interest.

“Ugh, Dad!” I responded exasperated, “You just don’t get it!”

I was wrong. He got it perfectly.

That was it. A picture of a pin dropped on a spot in Portland and few words about going to see the once minister of a mega-church, now author of a few controversial books. But oh, man, did the replies to that post explode!

I decided to add my 2 cents on my friend’s wall.

One reply posted directly to me. The message came across so condescendingly that I didn’t even think. I typed in my gut-reaction rebuttal as fast as my fingers could fly across the keyboard. (Mistake #1)

I made my case for my beliefs all right. But with no gentleness, only in harsh defense. (Mistake #2)

Remember, all of this took place on my friend’s wall. Even though his thoughts did not reflect mine, anyone reading his status may see my words and ascertain that our beliefs were the same. (Mistake #3)

Later I discussed the situation with my pastor. “Stop arguing on Facebook,” he said, “it’s not worth it.”

“But, but, but,” I stammered back, “I can’t handle closed minded opinions!” Not admitting that I can be just as closed minded as the guy with the opposite viewpoint.

My pastor speaks truth. There were plenty of controversial issues present in Jesus’ day. What did he do when he was confronted with a tough topic? He told a parable. He used his followers’ personal experiences. He took the argument out of the issue and dove into the heart matters of those around him.

Social media doesn’t help when one strives to live like Jesus. Without the face-to-face conversation it is too tempting to be cruel, to jump to anger, to argue with people you don’t even know.

Today is Good Friday. We remember the ultimate sacrifice Jesus made for us; crucifixion for our sins. “Blessed are the peacemakers,” he said in his Sermon on the Mount, “for they will be called children of God.” (Matthew 5:9)

He did not die for war. He died for peace. He sure as heck didn’t die so I could verbally clobber others on Facebook. He died because when I do slip into a passionate internet attack, I know I am loved by the One who matters.

Many who celebrate the Easter weekend focus by fasting from food Good Friday to Easter morning. This weekend, I will take a social media fast. No Facebook. No Twitter. No blogging or blog reading. This will be my time to focus on my Savior. I pray this will give me time to re-group and remember the true significance of Easter.

What do you think? Is social media the right venue to rant and argue? How do you manage to constructively reply to views that conflict with your own?

Have a blessed weekend.
He is risen, for you and for me.