If you read my post a few weeks ago, you know it’s my goal to follow Eleanor Roosevelt’s advice: 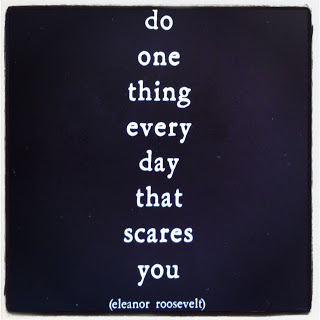 I’ve stepped out of my comfort zone a ton in the past year. 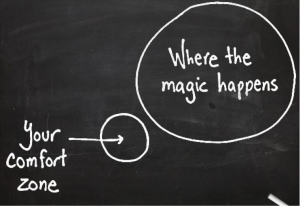 Only last Saturday, the one thing that scared me turned into a panic attack.
Earlier my husband, Edd, received an invitation for the two of us to attend a fundraising dinner benefiting Self Enhancement, Inc. I jumped at the chance to go.

You may think my excitement was due to the event taking place at The Nines, a chi-chi hotel in downtown Portland. I’ve been dying to dine in its upscale restaurant, Urban Farmer, since it opened. Justifying the money to eat a meal there hasn’t happened yet.

While the location appealed to me for sure, I was truly thrilled about attending an affair benefiting this non-profit supporting at-risk urban youth. I’ve never been to a high(ish) society fundraiser before. Local celebrities would fill the room, Portland Monthly would photograph the event, networking opportunities would… would…would…

Networking? Small talk? People with lots and lots of money? This isn’t my kind of gig.

The realization hit me at noon on the day of the fundraiser. I panicked. I couldn’t breathe. I started crying. Bawling, actually.

What was happening to me? I prayed to God and to Eleanor Roosevelt. Why am I acting this way?

“It’s okay,” I tried to self-soothe, “you’re just apprehensive. It’s out of your comfort zone. You blog about ‘out of comfort zone’ . Get it together!”

I didn’t convince myself.

I admitted my anxiety to Edd. He comforted, “Sweetie, we won’t go. Nothing is worth the stress of this. Don’t worry about it.”

(I’m sure what he really meant was, “Thank God. Now I don’t have to get dressed up.”)

So last Saturday, instead of fine dining and rubbing elbows with the Portland elite, we ordered pizza and watched The Princess Bride with our girls. I wore my sweats and relaxed in my comfort zone.

But I can’t get rid of the feeling that I failed. I failed to do the one thing that scared me that day.

What do you think?

Did I totally blow it – making a mountain out of a molehill when I really had nothing to worry about?

Or is it okay to “just say no” sometimes? And if so, when is remaining in your comfort zone justified?

Comment below and don’t worry about hurting my feelings. (If you don’t want to log in, you remain anonymous.)