Like millions of of YouTube watchers around me, I have fallen in love with Robby Novak. His “Kid President” persona is no doubt the most motivating third grader on the planet. I’ve seen Pep Talk dozens of times, each view willing myself to be more awesome. Mother’s Day became much sweeter after watching Open Letter to Moms and Diabetes vs. Diabeetus cracks me up. (“Who says ‘po-taw-toe’?”)

I knew listening to Robby speak would be a highlight of Love Does Stuff last week. What I didn’t expect was to fall into fangirl admiration for Kid President’s brother-in-law, Brad. 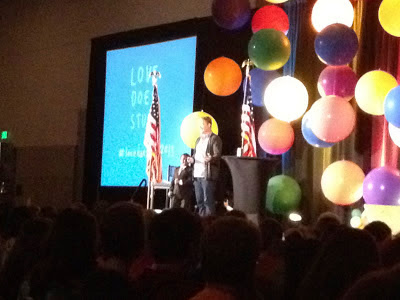 Brad Montague is the genius behind the viral YouTube vids. Last July, as political nonsense dominated our televisions, Brad asked his wife’s brother what he thought life would be like if kids took charge. The resulting video project not only entertained his family and hundreds of new internet fans, but SoulPancake saw the awesome and asked Brad for more videos. Luckily for us, he and Robby agreed.

Brad simply says part of the reason for the extraordinary among their ordinary is to joyfully rebel against the norm. (Key word = joyfully.) Robby suffers from Osteogenesis Imperfecta, Brittle Bone Disease. The 9 year old shared he’s had over 70 broken bones in his short lifetime. When asked how it feels to break bones so many times, he responds in the voice we’ve all come to recognize, “Well…how do you THINK it feels?!?”

Brad runs GO! Camp, a week long experience for teens to mesh ideas in order to lead and serve with God’s kingdom in mind. (Oh, if I were only 15 again. Guess where I want my kids to go in the next few years?)  Brad is the guy to watch for “Love Doing Stuff.” 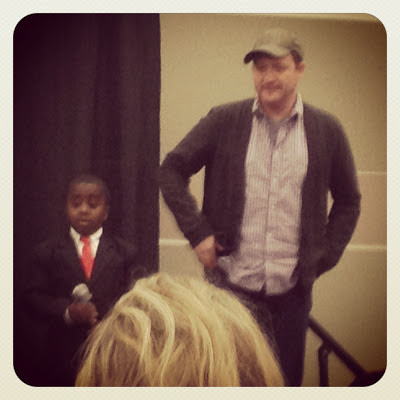 Being the instantaneous internet star he is, Robby has been approached to sponsor products, appear in music videos, and even take a role in a horror move. The family nixed those plans. No crazy stuff for this kid. He’s going to stay awesome as is.

My absolute favorite thing to tell you about Brad Montegue is the shear joy he exudes from being around Robby. Brad’s laugh is the best – or at least just as good as Robby’s – and you hear it often when “Kid” is messing around.

Watching the two together gave me pause. How often do I laugh with my own children? I’m talking about a heart-felt, belly originating, joy-filled laugh. I seriously can’t remember. Mostly my conversations with the girls are serious, directive, and stressed. Not a lot of laughing. It’s time to change.

Once I learn to laugh more, I’m sure Kid President and his brother-in-law would also tell me to dance more. “If you’re living out love,” Brad promises, “you’re dancing.”

Kid Pres may get the face-time, but you are the role-model for us adults. Thanks for laughing, dancing, and joyfully rebelling against the norm to make these videos, reminding all of us to “be awesomer.”