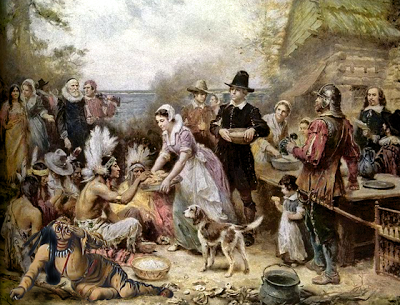 Instead of re-enacting Pilgrims and “Indians” with young ones, contact a tribal reservation and ask if they have needs to be met.

Instead of gorging yourself with more food than any human should eat in one day, let alone one setting, make 1/2 the menu and donate the rest to a food bank.

Instead of condemning people for shopping or stores opening on Thanksgiving, tell a single parent you’ll watch the kids in the next few weeks so gift shopping and wrapping can be done in secret.

Instead of joining the masses on Black Friday, join the Advent Conspiracy.

Instead of volunteering with the hundreds who also serve in the next 4 weeks, ask a non-profit when their volunteer pool is at the lowest. Make a commitment to help during that time.

Instead of attending one more holiday party, spend some time with those forgotten in a nursing home.

Instead of watching football… oh who am I kidding? You’re just going to watch, aren’t you?

The internet is full of commands listing what you should or shouldn’t be doing for the next month. Take a breath and listen to your heart. Where will it lead you during this holiday season?