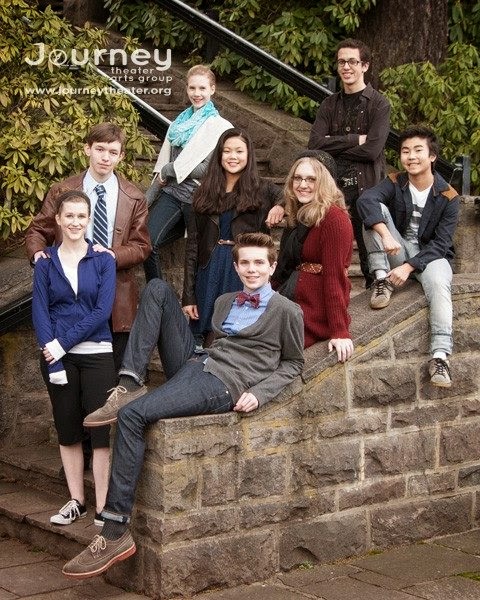 For two days I’ve been an emotional wreck.

Journey Theater Arts Group’s presentation of Godspell, Jr. has finished, but the sorrow I feel is more than post-show let down. Usually the girls are a bit melancholy after a week of performing, yet I am elated when life gets back to normal. I couldn’t put my finger on the reason I am so down this time. Then this morning it hit me – I saw Jesus. And I miss him.

I didn’t see our Lord in my grilled cheese sandwich or on a water stained wall. I saw Jesus in 37 youth acting out the parables found in Scripture.

When kids are cast in productions, they are given a part to play. For Godspell, Jr. only 3 boys were asked to portray a character: Jacob became Jesus, Jordan became Judas, Ethan became John the Baptist. For 34 other kids, their main responsibility was to convey stage exaggerated versions of themselves. Even their own names remained the same. The set backdrop was our city of Portland and the costumes came from the cast’s own closets. The script was peppered with inside jokes and improvised lines allowed our children’s personalities to shine.

The show was personal. The message was for today.

And in my daughters, I saw myself. Through the kids, I was reminded of Jesus’ teachings, love, and sacrifice. I realized, Jesus and I have a lot of catching up to do.

How appropriate for my awareness to come at the beginning of this Lenten season. I’ve never been one to give up something for Lent. I’ve tried a few times, yet never grew in my love of God or understanding of sacrifice simply by giving up refined sugar or watching less television.

Not posting my words online may not seem like much of a sacrifice. However, in the time it takes to organize writing ideas, to type, edit and check stats to see if anyone has read what I’ve written, I will be spending my time in the Bible, in prayer, and in study.

When I blog, the focus is on myself; my thoughts, my lessons, my information. This Lent, my focal point becomes Jesus.