What can I say that hasn’t already been voiced about Bruce/Caitlyn Jenner? Hasn’t everything already been blabbed?

Maybe. But not by me.

I don’t pay attention to the Kardashians. I know so little about them. Until recently, I didn’t know Bruce Jenner was even part of their clan. I didn’t care. 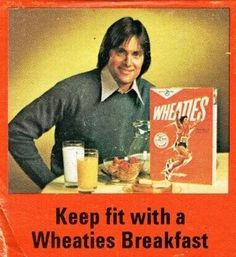 I know Bruce Jenner’s face because he was on boxes of Wheaties I ate when I was a kid. At that time I knew he was in the Olympics or something, right? I mean – I was six. He also was on my favorite TV show, CHiPs, but whatevs. At 11, I still thought Jon was cuter.

Jenner was a hero. He didn’t fight in a war. He didn’t save babies from a burning building.

He ran fast. No one seemed to balk when he was called a hero then.

Now, after surgery and a 20/20 interview with Diane Sawyer, Bruce is Caitlyn.

Jenner as a male or female does not affect my life in any way.

What DOES affect my life are the asinine comments I read on blogs, Twitter, and Facebook. Mostly – ESPECIALLY – from my Christian brothers and sisters.

I believe in God. I believe in Jesus who died for me. I believe I was formed in my mother’s womb. I believe all that other jazz we learn in Sunday School – I get it. I’m not writing from some pagan viewpoint.

On social media I read (many) a post stating Jenner is “Detestable. The world is going downhill.”

I want to scream at people – You DO know transgender desires have been around since the beginning of time, right? But now, NOW! We live in a world where it is a tad more accepting to live the life you want to live, even if it makes some uncomfortable. My opinion on the way someone inhabits this earth (legally and not hurting anyone) is irrelevant.

Imagine if the internet were around more than a century ago:

You want me to have only ONE wife? You’re crazy.

Slaves can have opinions? Un-Biblical.

Women are asking to vote? Detestable.

I can’t hit my own child? You’re messing with my rights.

Men sleeping with other men? This world is going downhill. (Oh wait. People still say that.)

Here’s the thing: Jenner is not one of my heroes. Not when he ran fast. Not when he had surgery to be a woman.

HOWEVER – Right now, in your child’s school, a kid struggles with gender identity.

A teen who doesn’t have supportive parents contemplates suicide because something is “different” inside.

A co-worker prays for a life he/she feels to be fully human, yet will never reach full potential because he/she is hidden.

I don’t know what it’s like to have those thoughts and feelings. Caitlyn Jenner does. And in some town, in some supermarket aisle, some person will see the Vanity Fair cover shot and think, Wow. There IS someone who feels just like me.

To THAT person, Jenner is a hero.

P.S. – Should someone in my life ever confide in me about changing gender, I’d point to Laverne Cox. She’s MY hero.