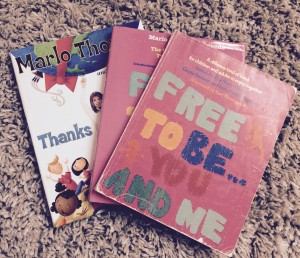 There’s a land that I see where the children are free. And I say it ain’t far to this land from where we are.

I sang these lyrics over and over growing up. The message a part of my inner being, a truth instilled in me since the day I was born. In therapy, I may bring up a ton of things I wish my parents had done differently (Isn’t that what therapy is for? My own kids do the same.)  – but never, NEVER, was I insecure about who I could become.

Or how I needed to dress.

Or told about the toys with which I should play.

And honestly, until last night I was naive enough to believe all Christian parents wanted this for their children.

Boy was I wrong.

A while ago I saw this around my twitter feed:

I really didn’t think much of it. My daughters and I see things like this periodically and roll our eyes. Abi Bechtel saw the sign, snapped a pic, and tweeted it to Target. Good move.

Target saw the tweet and the support behind the tweet, then made a policy not to assign gender to toys. Good move. Because humans in their right minds can agree that “building sets” aren’t necessarily a gender role issue. Plenty of architects and designers have uteruses. Not a big deal.

Only, I guess it IS a big deal because now people are UP. IN. ARMS. that Target would dare take down gender labeling signs.

Plenty of folks think the issue is real, including Franklin Graham: 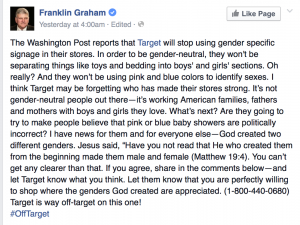 Does my daughter, who hates pink, believe labeling that states only everyone but girls want a gray building set? Maybe she wants “girls building sets” to resemble actual bridges she sees here in Bridge City. And how does my friend’s son, who loves pink and unicorns, only find that toy in the “girls” section? I totally missed this verse in scripture.

Also, does this mean I can’t wear my Star Wars shirt anymore because space movies are for boys? I don’t even understand my life anymore. 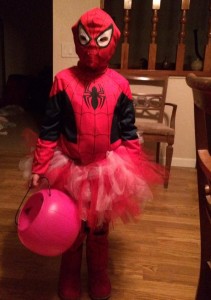 Sigh. Thank God my parents were wise enough to buy this first edition of Free To Be… You and Me in 1978. Praise heaven a sequel was released ten years later: Free To Be …A Family. When Thanks and Giving All Year Long came out after my kids were born, I was over the moon.

The concepts in these books are the values we teach our daughters. You may think sign labels are petty and I shouldn’t be wasting time defending Target’s decision. However, I view the gender labeling as disrespect. Not to me – but to the thousands of boys and girls who have been mocked for playing with toys “made for” the opposite gender.

Can’t we agree we should be making this world a better place for kids to grow?