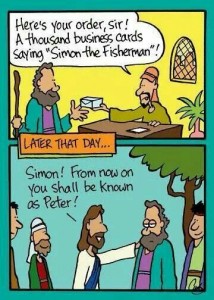 I’ve known what I wanted to name my daughter since I was a teenager. I remember talking with my cousin one day about kid names.

If I have a girl, I told him, I’m naming her Emma Rose.

Emma was my maternal grandmother’s name. Rosa, the name of my father’s mother.

Why would you do that??? he retorted, “Emma” is an old lady’s name! In the 1980s, all the Emmas we heard about were senior citizens.

It didn’t help matters when the TV hit show, Friends, gave Rachel’s newborn the same name. I remember watching that very episode in 2002. Monica admitted to Rachel she had a name picked out for her own child since she was 14, but didn’t want to say it out loud for fear someone would “steal” it.

Call it instinct, I knew what Monica’s answer was going to be as soon as Rachel persuaded her to share. Noooooooo! I yelled at my television – yet the name came out anyway. Emma.

So now my daughter shares her name with approximately one gazillion other girls in her age group. I wasn’t going to make the same mistake twice. Next time, we’d go for originality.

When I became pregnant a 2nd time, we told my mother-in-law our new daughter’s name would be “Annika”, after a character in one of my favorite books, Pippi Longstocking .

Why would you name her that?  she replied, No one will even know how to pronounce it!

Our Annika is now in 7th grade. She shares her class with two other Annikas, one even with the same last initial, “Z”. What are the odds? Judging from all of the Annikas we’ve met in the last 13 years, the odds are pretty dang good.

Time.com’s recent viral post has readers entering their names and finding out what they may have been named in various decades. As the 43rd most popular name in 1970, my name, “Andrea”, may have been “Gabriella” had I been born today. Of course, if it were 1910, I would go by “Beulah”.  I prefer the names of the current decades.

As literature, one of the most beautiful aspects of the Bible for me is the learning the actual definition of names. Although, I can’t imagine naming any child with the meaning, “full of sorrow” or “son of my trouble”, I do appreciate how names change as characteristics are developed. Abram to Abraham. Simon to Peter. Saul to Paul.

How cool would it be if we could change our names to match our personalities as we grew older? Social Security would have a fit.

How do you feel about your given name? Would you change it if you could? If you have children, how did you decide what to call them?